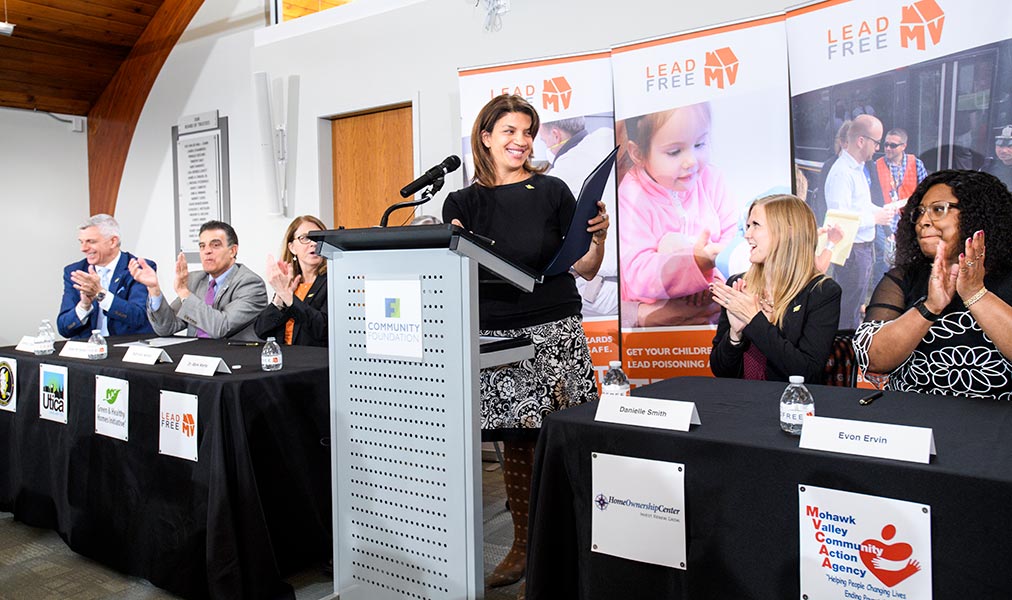 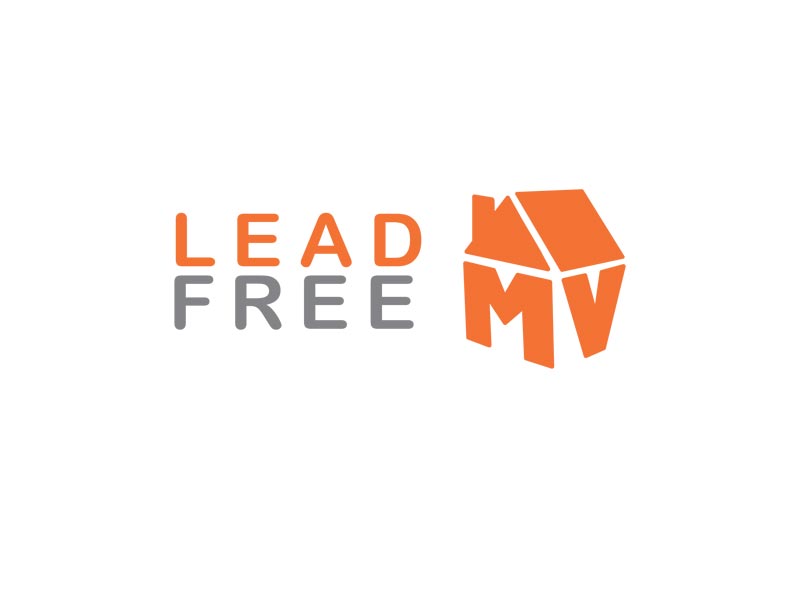 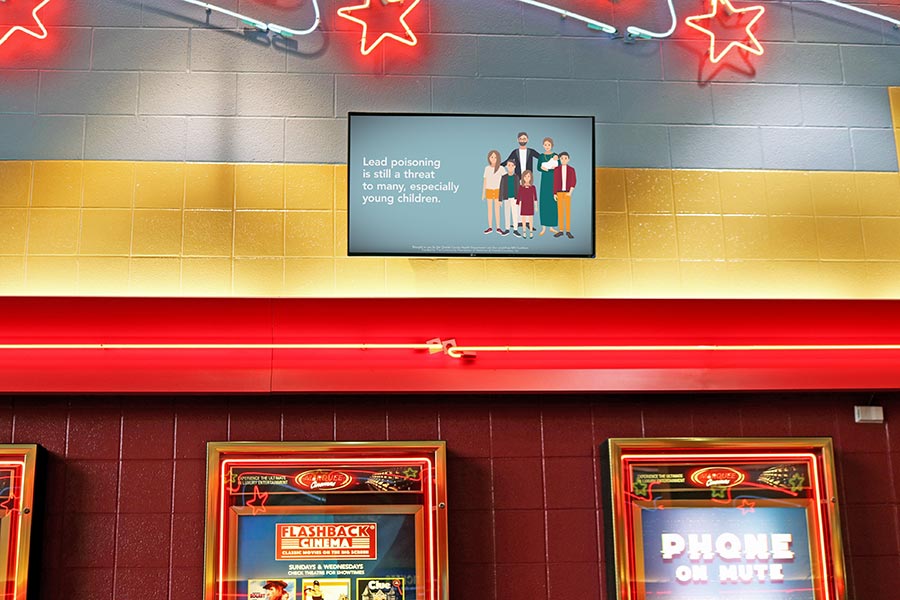 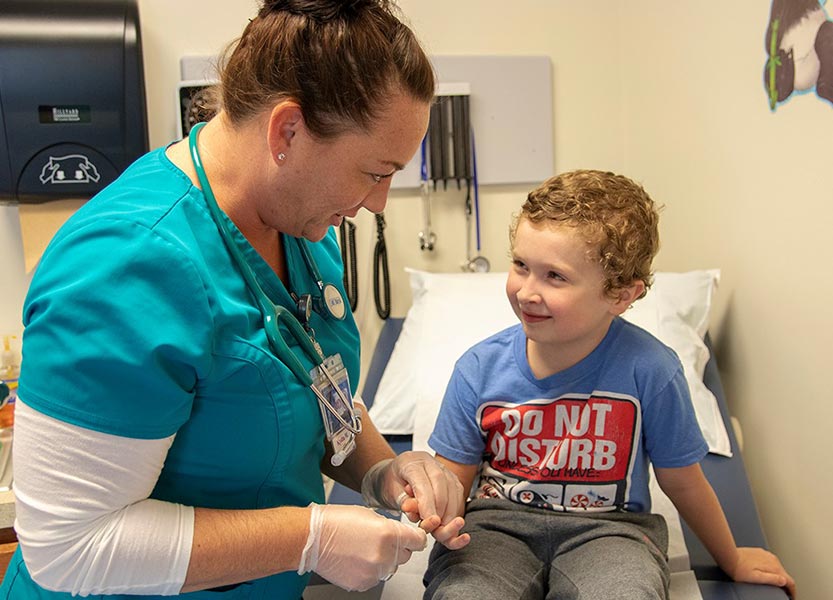 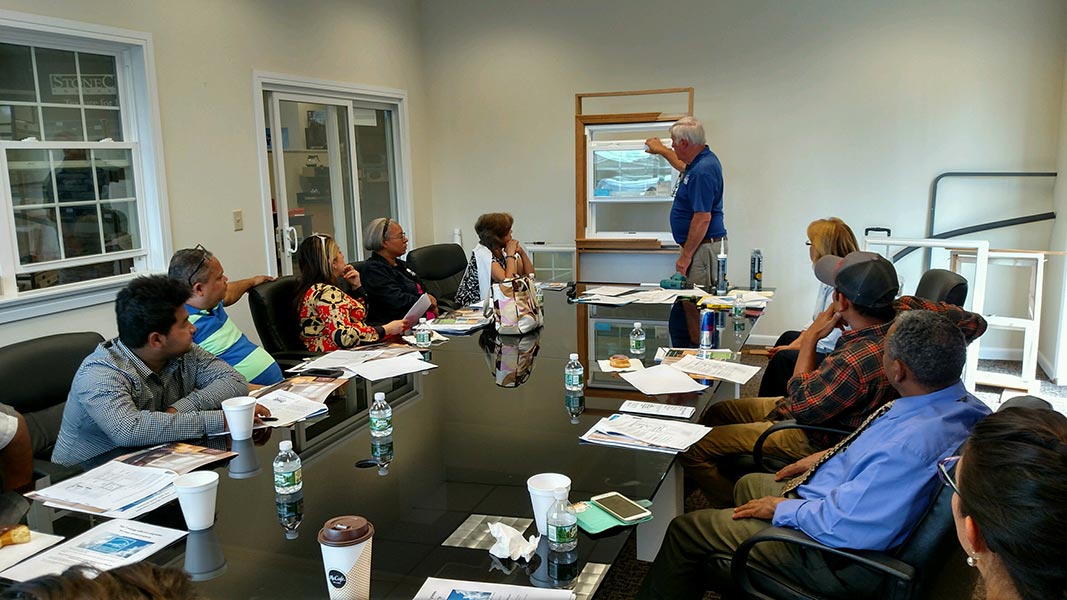 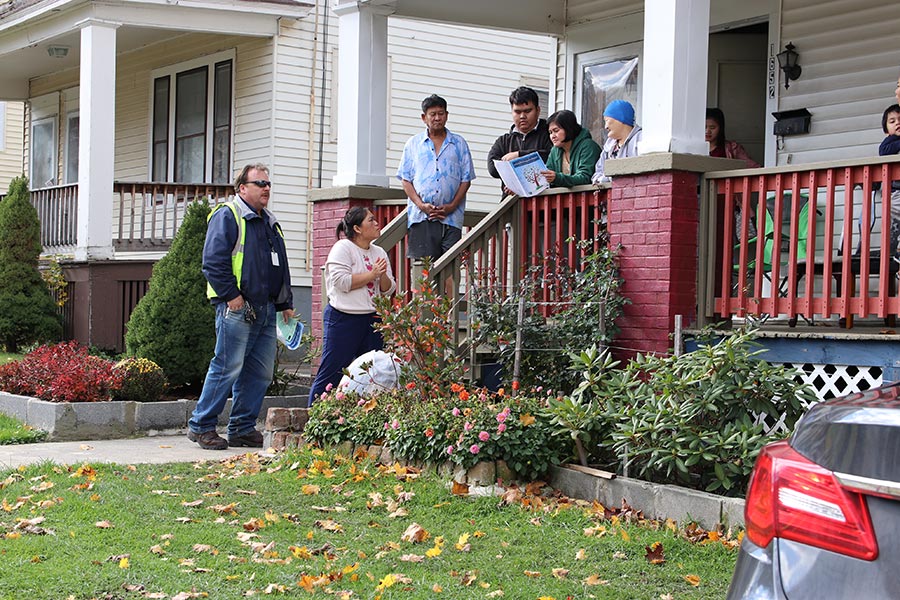 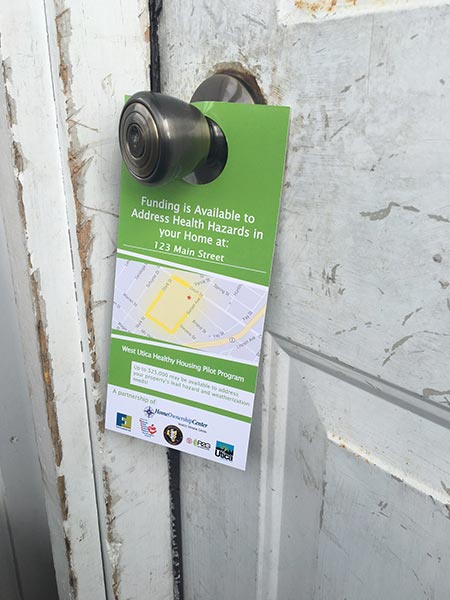 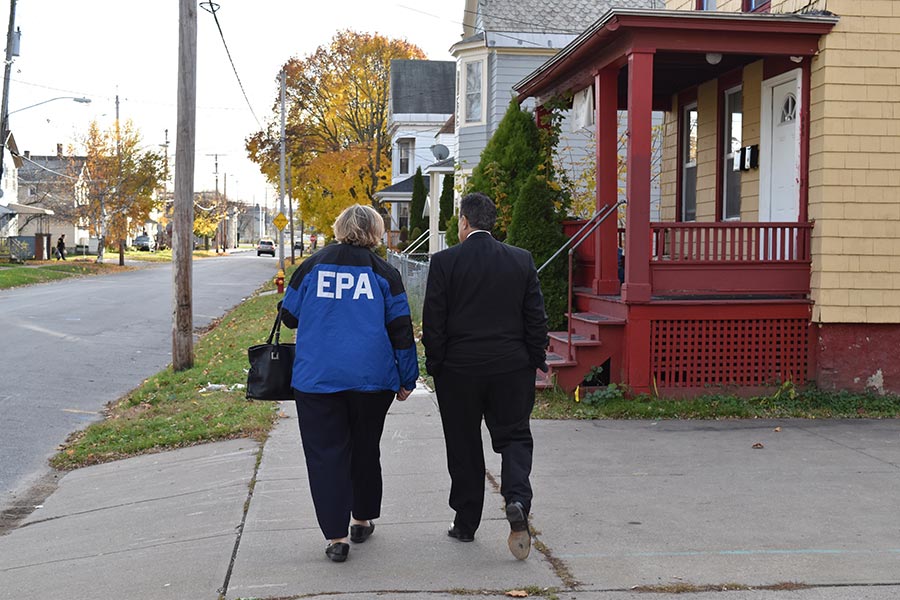 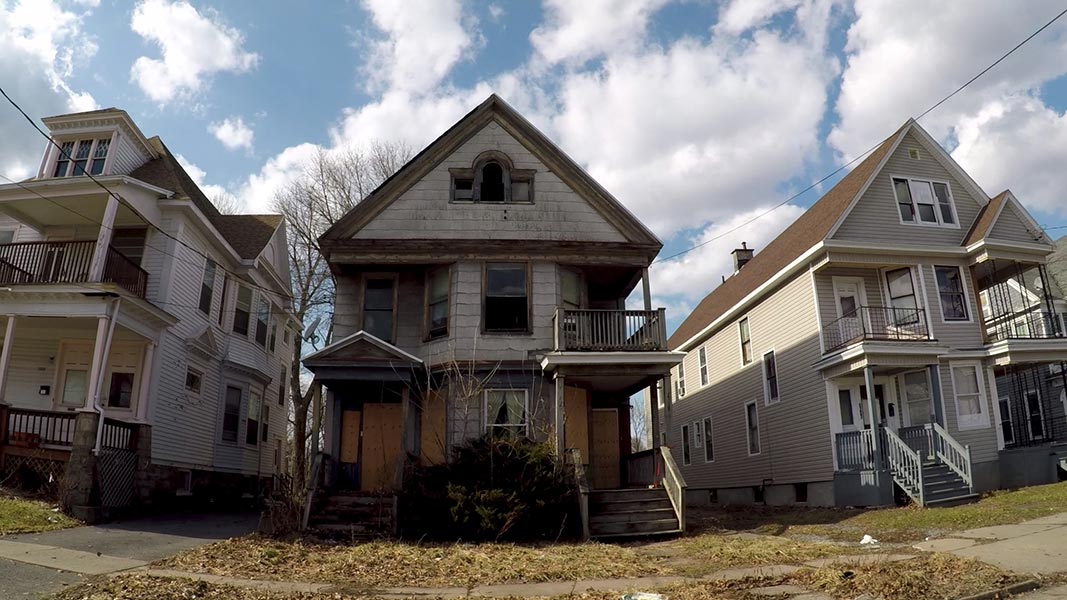 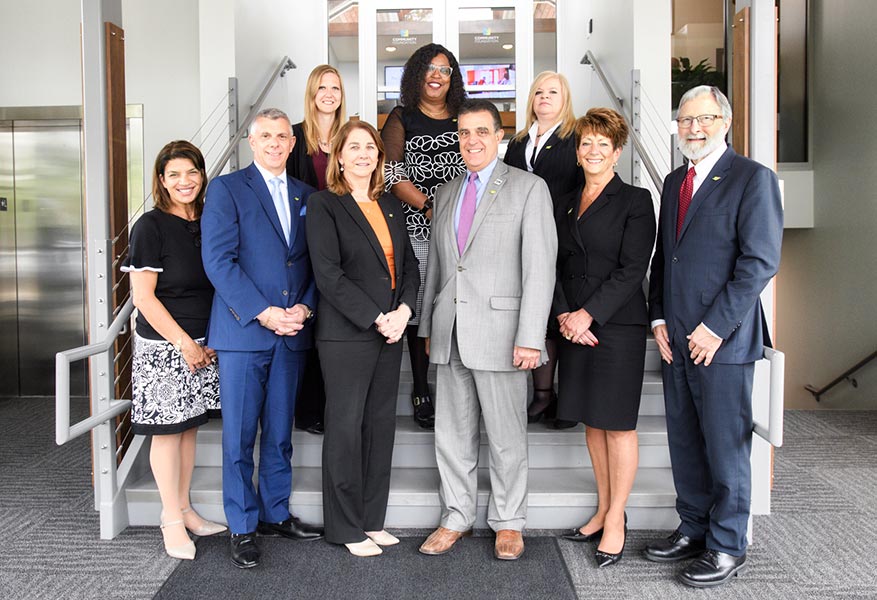 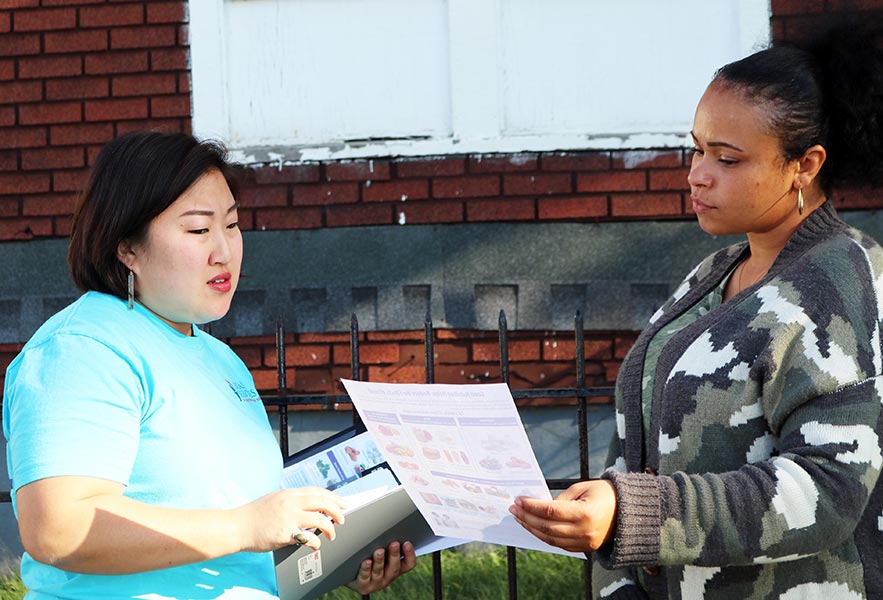 Lead poisoning, the build-up of lead in the body, results from breathing in or swallowing even tiny amounts of contaminated substances. Children under age 6—when the brain and nervous system are growing and developing rapidly—are especially at risk because lead is a neurotoxin that limits brain development.

Early irreversible effects can include learning difficulties, irritability, growth delays and behavioral problems. Depending on the severity of lead poisoning, the effects can be lifelong and severe, even catastrophic. Lead hazards are common in deteriorated painted surfaces—interior and exterior—associated dust residue and contaminated soil or water, all of which may be found in homes and buildings built before 1978, when the federal government banned the use of most lead-based paint.

The burden of lead poisoning hits particularly close to home in our area. Oneida County has one of the highest levels of childhood lead poisoning in New York state, and Herkimer County levels are double the state average.

Utica’s incidence rate of elevated levels of lead in children’s blood is greater now than Flint, Michigan’s at the time of its well-known lead-related water crisis. Unlike in Flint, our region’s primary source for lead exposure in children stems from chipped and peeling paint in our aging housing stock.

Despite a state law requiring early childhood testing for lead exposure, approximately one-third of children in the two counties have not had the required blood tests. While testing rates are on the rise, greater collaboration is key in getting to the roots of the problem.

In 2016, The Community Foundation partnered with more than two dozen organizations to launch the Lead-Free Mohawk Valley (LFMV) coalition with an initial $1 million investment. In 2018, The Community Foundation reaffirmed its commitment with an additional $5 million investment over the next decade to focus on the reduction of lead hazards and expand testing and community awareness of the problem.

Today, the coalition consists of more than 100 individuals from more than 40 organizations representing public health, government, law, insurance, healthcare, education, childcare, housing, construction and support services. With LFMV securing an additional $7.5 million in funding, $13.5 million is committed to addressing lead poisoning in our region. And the coalition’s efforts are just beginning.

“The coalition model has proven to be successful because it allows us to bring together a wide variety of agencies and efforts, helping to create more impactful partnerships,” said Alicia Dicks, president/CEO of The Community Foundation. “As a collective, we’ve been able to leverage the effectiveness of each partner’s current strategies and identify opportunities that will allow for even greater outcomes.”

In 2018, the City of Utica was awarded a $3.5 million U.S. Department of Housing & Urban Development (HUD) grant to help address lead and home health hazards in 180 housing units for low-income families.

Eliminating lead poisoning takes a strategic, collaborative and steadfast plan, a method that the LFMV coalition has embraced and taken to the next level. Although there is a great deal of work ahead, investments associated with this long-term effort will benefit future generations’ health, safety and quality of life.

“What we’re here to deliver are outcomes,” said Norton. “Outcomes for the child who will go to school and be healthy and ready to learn, the child who will compete in the classroom because they aren’t poisoned by lead and because they are sleeping through the night without asthma. Being able to change that statistic and make it an opportunity is incredible and it takes political will and leadership.”

West Utica Healthy Housing Pilot Program data demonstrated that it costs about $13,000 per home to remediate for lead. With nearly 25,750 pre-1978 houses in Utica—91% of the city’s homes—remediating all potentially lead contaminated housing would cost at least $334 million. It’s clear that current funding is just the beginning to ensuring a lead-safe future for all community residents. Read on to learn about some of the projects that each of the Coalition’s works groups have been focused on to reduce childhood lead poisoning and how your support can help.

The Green & Healthy Homes Initiative addresses the health, energy efficiency and safety needs of a home through a comprehensive housing assessment. In 2019, LFMV coalition partners signed a compact with GHHI to establish the Utica-Oneida County site. GHHI Utica-Oneida County will leverage the City of Utica’s recent HUD lead hazard control grant, which will remediate 180 homes over the next three years. Remediation funding will provide housing interventions to reduce lead hazards and household injuries while increasing household energy efficiency. These services are valued at $13,000 to $23,000 per household.

The most common cause of lead poisoning in our region is deteriorating paint or lead dust in poorly maintained pre-1978 housing. The Window Replacement Pilot Project focuses on lead contaminated wood sash windows; to date, 344 windows in 35 housing units in the City of Utica have been removed and replaced. The project also includes an educational component to help property owners and tenants keep their property lead safe going forward. The average window replacement cost is $230 per window.

Children in New York state are required to be tested for lead poisoning at ages 1 and 2. Despite the legal requirement and steady increases in testing rates over the years, approximately one-third of children in Herkimer and Oneida counties have not been tested for lead. To increase lead screening rates and make it easier for parents to have their children tested, a point-of-care approach implemented in 2017 placed blood-level testing units in multiple pediatric medical facilities and one elementary school-based clinic to encourage families to have their children tested during routine office visits. Testing equipment and start-up supplies are valued at $3,050 per health provider office.

To advance public education about lead poisoning’s causes, effects and solutions, a 2018 campaign reached an estimated 228,000 area movie goers through a 30-second public service announcement. The video’s messaging focused on reaching parents and guardians, educators and other targeted constituents, emphasizing the importance of testing. The video was also distributed for use on medical waiting room TVs and electronic billboards.

A site visit by then-EPA Region II administrator Judith Enck in late 2016 spurred several trainings and technical assistance partnerships over the following year, including a HUD-EPA landlord training for property managers and landlords to learn more about lead-safe housing’s regulatory requirements; additional training for city and county agencies; similar information-sharing for community organizations regarding technical assistance from HUD, EPA and the U.S. Attorney’s office; and a neighborhood tour coordinated by the LFMV coalition.

With technical assistance from the National Center for Healthy Housing and other providers, the LFMV coalition policy and advocacy work group will prepare a proposed City of Utica pre-rental inspection ordinance. A similar Rochester, NY city ordinance is credited with an 80% reduction in lead poisoning cases over the past decade. To ensure resident engagement in the preparation of the ordinance and other policy-related activities, Legal Services of Central New York has hired a community organizer to raise awareness of lead poisoning in Utica’s most affected neighborhoods. In addition, with approximately $45,000 in co-funding from Robert Wood Johnson Foundation and the New York Community Trust, our area has become part of the 2019 National Center for Healthy Housing Policy Cohort.